Now summer is officially here! How wonderful. The greens of the world are so deep and lush while still alert and ready for months of photosynthesizing. The fields on my drive out to the farm are highlighted with daisies, hawk weed, clover and seeding grasses –all offering contrast and beauty to my morning and evening commute. Summer clouds roll by the farm on their way to somewhere and fluffy seeds float along below them to somewhere closer. Maybe to get stuck in a row of carrots.

I have been considering lately how lucky I feel to be able to perceive beauty. Not just with my eyes, but with all my senses. Maybe especially visually but also temperature, sound, smell, taste, these are all ways we experience beauty. How wonderful.

Delightfully, their beauty (as far as I know) has nothing to do with humans. Seemingly, they don’t directly affect our survival or well-being. We cannot own or tame the beauty of these things. We probably shouldn’t try to own or tame any beauty really.

I try to take moments during the day to take particular notice of how lovely things are. It is easy to get swept up in to-do lists. Thankfully, all of the things on my farm to-do list are bathed in beauty; I don’t have to try too hard to see or taste it. I’m happy to pass several items from our farm to-do list on to you and your home. Enjoy!

For the beautiful farm crew,

(this was sent to Janaki by a member [thank you!] and while you might not have 4 cups or radish tops, I’m sure a half batch would work out well or you could probably substitute turnip greens as well)

Combine first 6 ingredients in a food processor or blender.  Process until smooth, scraping down the sides as needed.  Add additional olive oil to achieve a thick sauce consistency.  Season to taste with salt and black pepper.

Notes from the Farm

In the growing seasons of my life I end up with a lot of bruises on my legs. I tend to throw my body around a bit and have little grace and take little care when legging up onto a wagon or truck bed. Last week I fell off a new transplanter we were using to put in the 5th planting of brassicas. I have a pretty epic bruise on my left calf. It doesn’t keep me up at night, but it does hurt to put on socks, or pants, and I can’t cross my left leg over my right. I am not trying to impress anyone out at the farm, or anywhere really, so I’m still wearing shorts and skirts. Why hide?

Last week I went to see some UMD students perform Much Ado About Nothing on the grounds of Glensheen. It was a lovely evening for it –I get such a kick out of that play. The little song in the middle of the play is cute and has a simple ring of truth that Shakespeare lends to words: “Sigh no more ladies, sigh no more. Men were deceivers ever. One foot in sea and one on shore, to one thing constant never. But sigh not so and let them go and be you blithe and bonny, converting all your songs of woe into hey nonny, nonny!” Take the role of gender with a grain of late 16th century salt.

And Benedick, having found love after swearing to never marry, has a couple of lines “Serve God love me and mend” and  “live unbruised”. I love those lines. They’re also lines set to music in Mumford and Sons first album. A great song.

So, my leg is bruised.

Other parts of me are bruised in a different way.

And I think parts of our country are bruised. It hurts, and it’s ugly and we can’t pull up our socks or turn on the radio or drive down the street without being reminded of the bruises.

I don’t know what it means to “live unbruised” but I long for that. It is not necessarily that the bruises aren’t there anymore –one just doesn’t have to let them dictate one’s path. I can still love my legs and my brain and my country even if it hurts and is dark and unnaturally yellow somehow.

Whatever bruises you might find yourself noticing or acquiring this week, I hope you live out of that place well and that the good food in your belly sustains you through all of it.

Preheat oven to 300°F. Rinse and dry the kale, then remove the stems and tough center ribs. Cut into large pieces, toss with olive oil in a bowl then sprinkle with salt. Arrange leaves in a single layer on a large baking sheet (I needed two because mine are tiny; I also lined mine with parchment for easy clean-up but there’s no reason that you must). Bake for 20 minutes, or until crisp. Place baking sheet on a rack to cool.

Kale-Dusted Popcorn If you’re making the chips with the intention to grind them up for popcorn, I’d use less oil — perhaps half — so they grind without the “powder” clumping. I ground a handful of my chips (about half) in a mortar and pestle and sprinkled it over popcorn (1/4 cup popcorn kernels I’d cooked in a covered pot with 1 1/2 tablespoons oil over medium heat, shaking it about with potholders frequently). I seasoned the popcorn with salt. I liked this snack, but I think Parmesan and Kale-Dusted Popcorn would be even more delicious. Next time!

Spinach and Smashed Egg Toast (For one)

Bring small pot of water to boil. Lower egg into it and boil for five (for a runnier egg) to six (for a less-runny but still loose egg) minutes.* Rinse egg briefly under cool water and set aside.

Wash your spinach but no need to dry it. Put a small puddle of water in the bottom of a skillet and heat it over medium-high. Once the water is simmering, add the spinach and cook it until it is just wilted, and not a moment longer. Transfer it to a colander and press as much of the excess water out with the back of a fork as possible. No need to wring it out here; we’re hoping to those lovely wilted leaves intact. Keep that fork; you’ll use it again in a moment.

Put your bread in to toast.

Dry your skillet if it is still wet. Heat a pat of butter in it over medium-low heat. Add shallots and cook them for a few minutes, until translucent and a little sweet. Return spinach to skillet and add cream. Simmer them together for one minute, then season with salt and freshly ground black pepper.

Put your toast on your plate and spread it thinly with Dijon mustard. Heap the spinach-and-shallot mixture on top, then add the crumbled cheese. Peel your egg; doing so under running water can make this easier. Once peeled, place it on your spinach toast, smash it open with the back of that fork you used a minute ago, and sprinkle it with salt and freshly ground black pepper. Eat immediately.

* When you’re eating a soft-boiled egg right away, six minutes is the way to go. But here, since we boil the egg and then prepare the rest of the toast, it continues to cook and firm up a bit in its shell, so I’ve found that a 5 to 5 1/2 minute egg will give you the equivalent in the end. 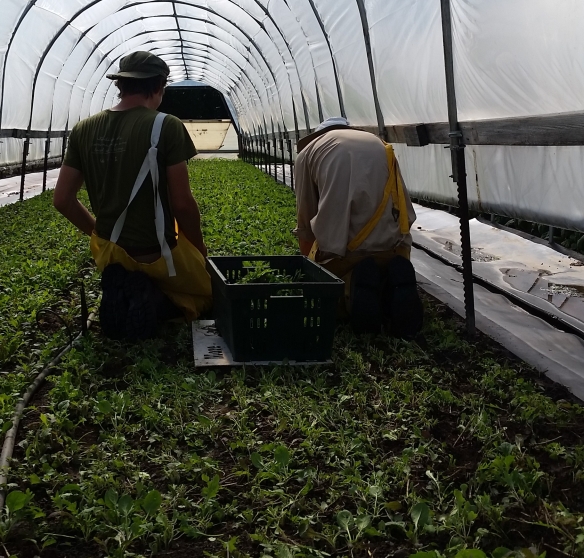 Notes from the Farm

Welcome to the first delivery of the season!
Here it is the second week of June already. The greens of the world are a different shade or tint every day, and there are always new flowers opening as old ones drop.
These past weeks the greenhouse has gone from being medium full to super full and now to almost empty feeling as peppers and tomatoes have been planted in the fields. Even with a cool and slow start to the spring, we seem to be almost on schedule. These past couple of weeks our newest crew members, Kate, Lizzy and Michael, have started and are game to learn-while-doing every day. Sam from a couple of years ago is back for the season, along with Teri, Patricia, Dave, Janaki and our wonderful crew of volunteers.
And now, after several weeks of preparation and side projects we’re starting the harvest! I am ready to get back into this routine.
Whether you are new to a CSA model of getting produce, or well seasoned at the ebb and flow of the year, thank you for supporting us. Thank you for being willing to spend time preparing and eating our vegetables. I know there are easier ways to eat –  it is counter-cultural and time consuming to use whole food well. In a society that places too much value on being able to say “I’m just so busy”, slowing down to eat well is a pure form of resistance to the status quo of on-demand consumerism.
Perhaps as you start off this new season you have resolutions for the next 18 weeks. Whether it involves more preserving, sharing, fridge rearranging, or sitting down to meals with friends or family, I hope you get off to a good start. Enjoy the lovely week ahead!
For the sun-kissed farm crew,
Karin
In your share today:
Beet Greens
Cucumbers
Greens Mix
Green Onions
Rhubarb
Spinach

Place a large saucepan over medium heat and add half the olive oil. When it is hot, add the spinach with a pinch of salt (in batches, if necessary) and stir well. Remove when the leaves are just tender, drain in a colander and set aside.

Heat 2 more tablespoons olive oil in a frying pan over medium heat. Fry the bread for about 5 minutes or until golden brown all over, then the remaining tablespoon of oil and the garlic, cumin and pepper. Cook for 1 minute more or until the garlic is nutty brown.

Transfer to a food processor, blender or mortar and pestle along with the vinegar, and mash to a paste. Return the mixture to the pan and add the drained chickpeas and tomato sauce. Stir until the chickpeas have absorbed the flavors and are hot. Season with salt and pepper.

If the consistency is a little thick, add some water. Add the spinach and cook until it is hot. Check for seasoning and serve with paprika on top, or on fried bread toasts (as the Spanish do).

Have 4 pint (16-ounce) jars with lids ready. Split rhubarb stalks lengthwise and use a vegetable peeler to remove the stringy skin. Cut rhubarb into lengths that fit into the jars with just a little space at the top; fill jars evenly with rhubarb.

Combine sugar, vinegar, salt, coriander, peppercorns, chiles, bay leaves and 3 cups water in a large saucepan, and bring to a boil. Lower heat and simmer 3 minutes. Remove from heat and ladle liquid into the jars, placing 1 chile and 1 bay leaf in each. Cool, cover and refrigerate for at least 1 day. Will keep refrigerated for a month or more. 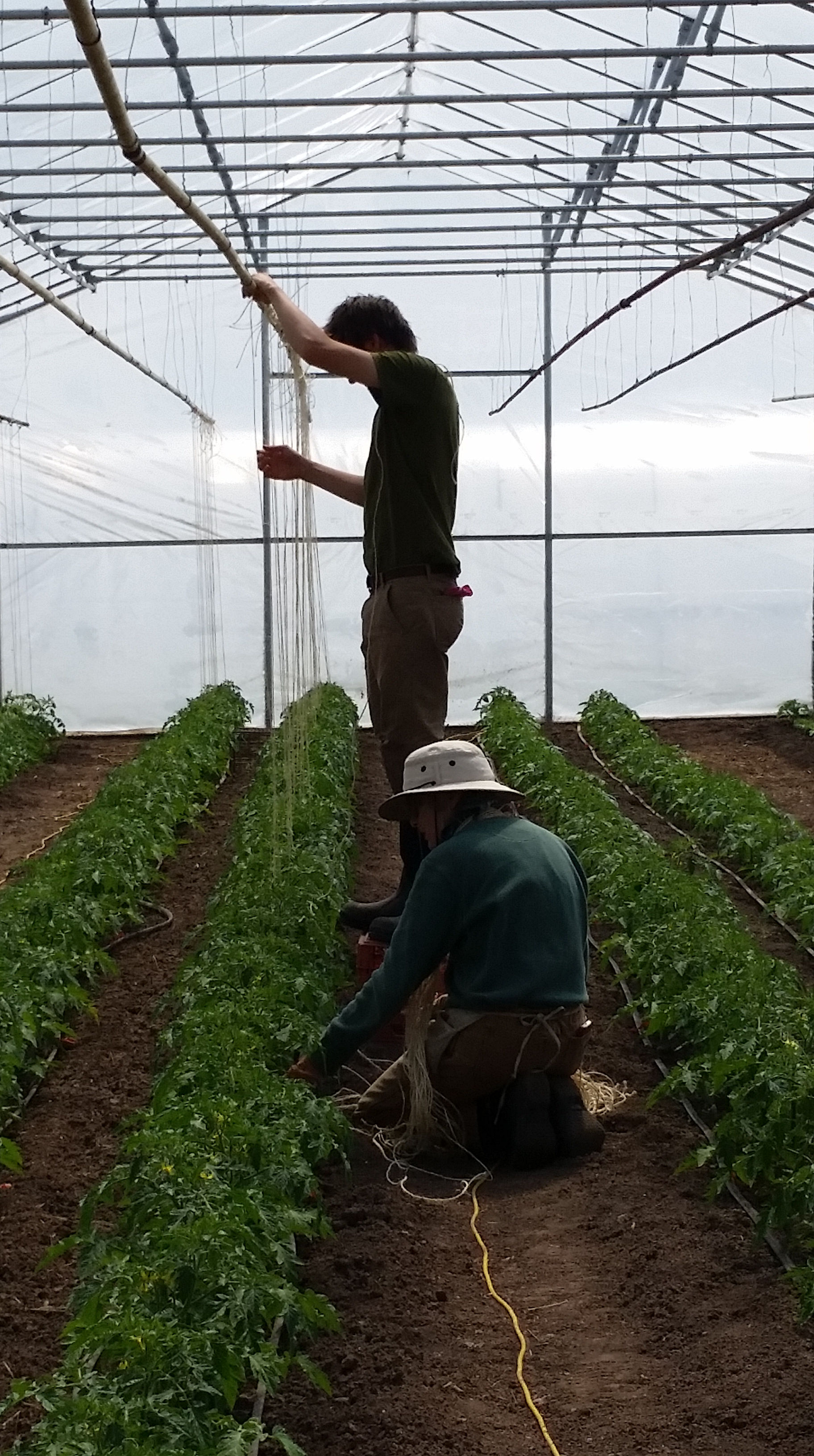