This weekend I made a broccoli salad for a family pot luck. Before I chopped the broccoli into a thousand pieces, I showed my grandma. I told her why I knew (thought) it was ready to pick, and what the variety (Imperial) looks like in the field next to other broccoli. She got a kick out of it –or she humored me. Either way, she wasn’t going to get that kind of information in that morning’s paper. I know she would rather I go back to school, but she’s happy enough to learn about what I’m doing. The broccoli salad was a hit, and I was bragging just a little bit about the fact that I had helped to grow it.

It has taken me time to get there. Years. To brag in the simple, and not let that weird extended-family pressure (to do more, be more, have more) change how I talk about my life or vocation. As a still fairly young person, I clearly remember the stressful feeling of 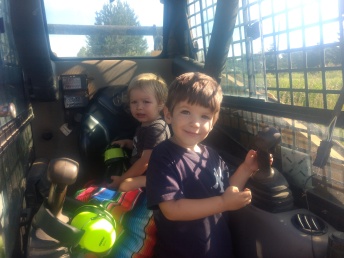 some conversations before graduating high-school, and after, and again after a two year degree. Well-meaning and loving people just wanted to know what I was up to; I know that now. At the time, however, it painted how I talked about what I choose to do with my life. Do you know that feeling? –where you try to make what you’re doing sound as snazzy as it possibly can but really it’s just 90% simple day-in-day-out stuff. Like trying to print double-sided tri-fold programs, counting broccoli, sitting in meetings, or listening to children’s music all afternoon. No one’s job is a fairy tale. And if it is, they work in Disney World and that’s it’s own sort of thing.

Adding anything into one’s life or taking anything out of it that isn’t a part of our culture’s value system takes work. It takes deciding on a new culture and new values. Like choosing to repair things instead of buying the latest and greatest, or to participate in a CSA.

Parts of our society are so bent on the next new thing or some strange sense of the American Dream that we end up allowing the best things to seem like burdens. Like preparing food or growing food. There’s a notion of “why would you do that if you could be doing X?” I’m doing it because it’s not a burden. It’s an honor. I am happy to work on the farm and I’m happy to wash a little dirt off my refrigerator shelves once in a while. And I’m proud to tell my family that I do so.

P.S. Dave wanted to let members know that this will be the last of the head lettuce for a while until cooler temperatures set in. A few cut worms have been found as we have harvested. Wash this lettuce more carefully than you normally would.

P.P.S. Dave also wants people to be aware that the basil is young, fresh and delicious. It won’t keep long, so unless you use it soon, he recommends tossing it with some oil to keep in the fridge for a bit longer.